Animballs live among us, and we have learnt to capture them and train them to fight for us. Capture them and collect them in your animball balls (animballs) and grow them to be the best they can be!

This game is a small project for my Master's to learn to use Fungus in Unity, it ends fairly quickly in the story... Fungus was a really nice introduction to using a game engine but it probably wasn't meant to be used for an rpg and combat system as I attempted. I had fun making this though.

I added a fix for a bug that recurred in different forms, mostly it would make you get stuck paused as if you were in a conversation or battle and you couldn't move past it, you are supposed to be stuck in place during conversation / battle but if you get stuck some other way - press "U" to unstick yourself!

This should not be needed any more,  I have whacked all the moles I could see, but in case I missed any... press the letter "U" on your keyboard to unpause. Please don't use the U key during battle or conversation, the pause is there for a reason to stop you getting into multiple overlapping conversations / interactions.

In other bug news, The SPACE bar is a bit sticky with doorways and things to interact with, sometimes you need to try moving around a bit / pressing SPACE a few times before it works.

Thanks to Red Chan for most of the face assets, most background assets / tilesets and animball characters by  ansimuz, a few other bits to be updated as I track them down.

The music is from David Vitas RPG collection, http://www.davidvitas.com, thank you!

And the little rpg sprites were all made using this cool free tool, http://gaurav.munjal.us/Universal-LPC-Spritesheet-Character-Generator/

Controls: Arrow keys or WASD to move,  SPACE to interact with stuff/ doorways/ people and Click and drag things you find into your inventory.

You can skip messages by clicking, pressing SPACE or Enter.

If you get stuck/frozen outside of battle or conversation, pressing "U" will unpause you, but using this when you're in a conversation will have unintended effects so only use it when you're actually stuck.

"P" exists as a pause/unpause but is only allowed outside of battle or conversation so there's no point using it.

- One playable character and choice of 3 starting animballs as well as several others you can catch in the wild.

- Randomised battle system with hit points, experience, level up, animball defence and attack stats, attack types which can inflict more damage on types weak against them, and animballs can learn up to 3 moves as they level up.

-  6 different areas to visit, NPCs to talk to and items to interact with to learn more about the animball world.

- A few collectable items to heal and lure  animballs and a drag and drop inventory to keep them in. 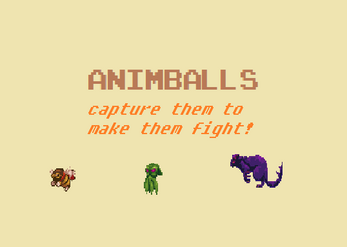